12 Straightforward Signs That Your Coworker Likes You

Perhaps you're suspecting that your coworker might be into something more than just work. Maybe he has been paying more attention to you for some time now. Cool down, such things happen, and sometimes it's normal for people working together to develop romantic feelings towards each other. But remember, when you meet 'the one' at work, it's essential to figure out the meaning of his behavior. It's vital to learn how to tell if a coworker likes you or is just acting nice.

Tips to Tell Whether a Coworker Likes You

Love is mysterious; it grows anywhere, and it calls for no preparations. But it can be tricky falling for your workmate because if things don't work out, life could become unbearable at work. But how can you tell that a guy's feelings are real? Here are some signs he may be attracted to you.

1. The guy tries to know if you're single

When a guy likes you, he may want to know what's happening in your life. But, his main interest may be knowing if you're single or if there is already someone in your life. If this happens, there is no doubt he is interested in you. Otherwise, he would have kept away from such topics. But you should be careful; he might be asking just as a friend, and not as a relationship question.

2. This guy always compliments you

When a guy is aiming at you, he tends to notice everything that is going on around you. He might not be too open, but he finds ways to compliment you. For example, he will complement the way you dress and recognize your neatness at work. He likes the way you carry yourself and may also not pass by without commenting on a new hairstyle, reminding you how good it looks on you. 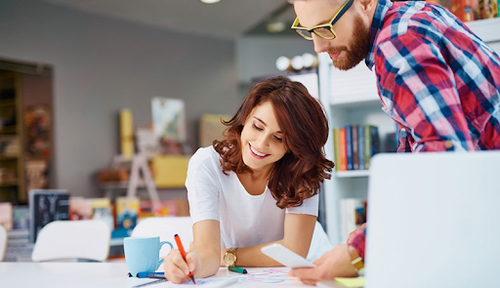 3. He defends you in front of others

This guy becomes overprotective and will not entertain anyone creating problems around you. No wonder he is always on your side when it comes to handling issues at work. If this guy is into you, he will defend you in front of other coworkers and remove the blame from you. This is a super sign that he cares and won't allow anyone or anything to hurt you.

4. He makes excuses to date you

When he falls for you, he tends to be obsessed with you. He will do anything to meet up with you. And at work he finds time to chit chat with you, always finding an excuse to take you out for either coffee or shopping. Note, all of this is geared to least spend time with you and learn more about you. This may be his way of communicating how attracted he is to you.

5. He gets playful with you

Does my coworker like me? Perhaps yes. If he gets playful with you, that's one of the best ways that can help you notice his attractions to you. If the guy likes you, he'll do anything just to make you smile. And that's why he may play jokes on you because he likes it when you laugh. He'll even find some funny nicknames and brings about jokes just to make it more fun. The truth is that he is using jokes to get closer to your heart and create intimate feelings between the two of you.

6. He touches and brushes over you 'accidentally'

This guy seems to bump into you more often. His timing perfectly matches with yours, and he'll accidentally brush over you during lunch break. When he is telling you something, he'll pat your back for no apparent reason. He'll compliment your new hairstyle and have a reason to touch it. It is not a coincidence that you two are bumping into each other all the time. He is probably doing it intentionally to capture your attention.

7. He helps you out with work

Regardless of a huge workload at his desk, this guy will always be free to help you out. He still passes by your desk to check on you and see if he can help with anything. He doesn't force it, though, but makes it clear that he is available in case you need help. Whether it is a printer that needs fixing or helping you carry heavy loads, he is ready to do it better than anyone else in the room. As long as it gives him a chance to be closer to you. 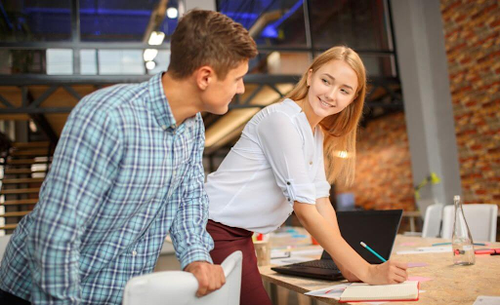 8. This guy brings you coffee

If he surprises you with coffee first thing in the morning, it can be a sign that he likes you. Especially when he makes it a habit. With time, he may accompany the coffee with some sandwiches. If that is not enough, he'll move a step higher and start buying you gifts, like flowers and chocolates, without you asking for them. This may be an indication that he cares, and he is trying to grab your attention. On the other hand, try and check out whether he is just nice or if he really thinks you're special.

9. He tells you about his personal life

This man diverts his talks from the usual office stories of upcoming projects to opening up his personal life. This is one among the many signs a coworker likes you and wants to talk more about other issues beyond work. He may even tell you about his plans regarding his career and let you know he plans to undertake his masters next year. When a man talks about his personal life, it could mean that he has feelings for you or he is just taking pride in his accomplishments.

10. He remembers everything about you

This guy will pay attention to everything you have to say and note all the details. He vividly remembers what you said during lunch or what you shared a month ago. Also, he remembers what you told him about your brown dog, Kinky. This could be a good sign that he has interests in you. He might not necessarily want to be in a relationship, but the point is, he likes you.

When a guy gets attracted to you, he is likely to always keep his eyes on you. From time to time you'll find him stealing glances at you during meetings or working hours. Although there is no problem in him looking at you; when he does it all the time it can suggest that he has intimate feelings for you. 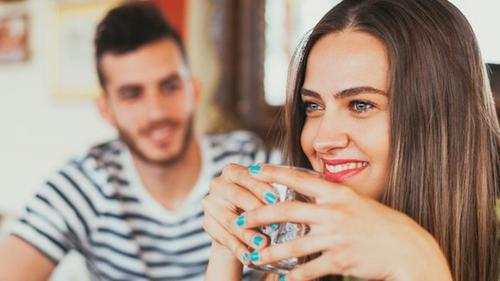 12. He asks you obvious questions

This guy asks you questions that don't necessarily need answers. Or that someone else in the room could have answered better than you. He may ask you about the schedule of the evening meeting, which he could have read from his emails. But the bottom line is that he is cooking up excuses to get your attention. And it could be a sign he is attracted to you.

13. He gets jealous of other men

If this guy likes you, he becomes protective of his feelings, and he feels bad if you mention another man. On the other hand, if he hasn't made a move already, he can feel threatened and jealous if you tell him you have a date. However, he may not say it openly.

At times it might be challenging to tell whether a coworker is falling for you or he is just playing around. Thus, you must pay attention to his behavior and draw your own judgment. Above all, learn how to tell if a coworker likes you. The above signs are just the first steps of your 'relationship.' Hopefully these signs will give you some help!

185202 Article 91
I'm a professional writer and systems analyst. My interests are sociology and philosophy. I love exploring human interaction, our need for companionship and how to hone the tools necessary to create lasting, meaningful bonds with one another.

I'm a professional writer and systems analyst. My interests are sociology and philosophy. I love exploring human interaction, our need for companionship and how to hone the tools necessary to create lasting, meaningful bonds with one another.